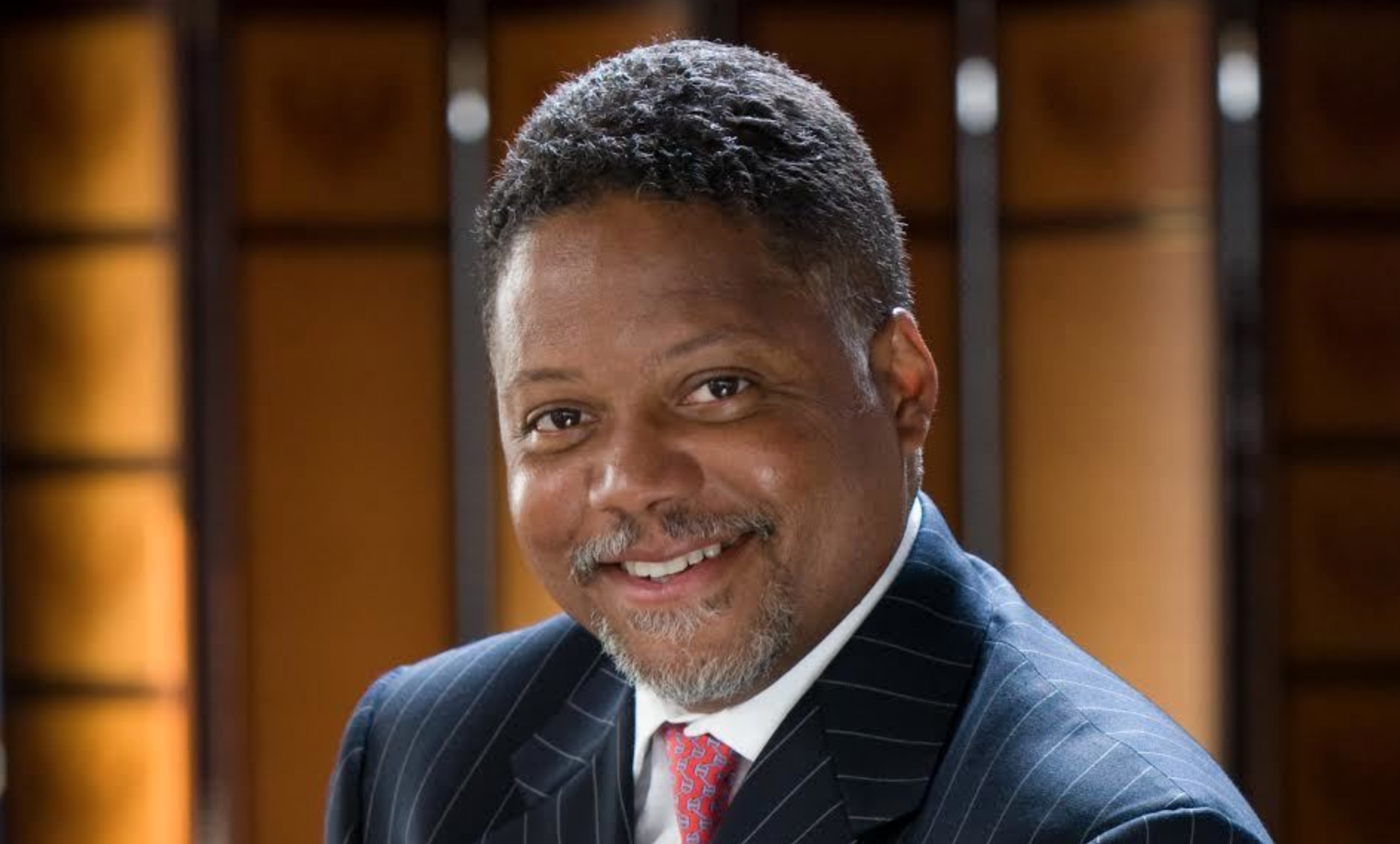 While the world tries to deal with the myriad and massive challenges presented by the coronavirus pandemic, many businesses are feeling the pain, too.

The travel and tourism industry is especially hard hit, according to Kenneth Fearn, chairman of the National Association of Black Hotel Owners, Operators & Developers, Inc. Occupancy is at a historic low.

“Our numbers are down from the mid-60s to below 10 percent,” Fearn told California Business Daily. “Which is just absolutely devastating.”

He is the founder and managing partner of Integrated Capital LLC and has six hotels, with properties in Miami, Houston, Pittsburgh, Atlanta, Silver Springs, Md. and Myrtle Beach, S.C. All are suffering.

He said his hotel in Atlanta has 344 rooms. Only five are booked.

“It started on March 10,” Fearn said. “By the end of the week, we had lost all our business for March. By March 17, all of April was lost. We have no business whatsoever for April.”

His association represents 800 hotels across all 50 states. He said when you include employees of black-owned hotels, along with workers in the Latino Hotel Association and the Asian American Hotel Association, there are 800,000 people who work in 35,000 minority-owned businesses. That is more than half the hotels in the country.

“And we are hurting everywhere,” Fearn said.

Fearn said he doesn’t blame people for not wanting to travel or stay in hotels. He understands their fear.

“This thing is unbelievable,” Fearn said. “I don’t think we’re overreacting as a country given what we see in Italy.”

He said in a perfect world, the United States would have been better prepared when the virus struck here, “maybe gotten ahead of the curve.”

Fearn said it’s crucial that Congress craft a recovery plan that ensures hotels are not left twisting in the wind. If that happens, only multi-billion-dollar corporations will survive this downturn. The Coronavirus Aid, Relief, and Economic Security Act or the CARES Act, must include support for the hospitality industry, he said.

What’s needed, he said, are loan extensions and forbearance. Also, no hotels should face severe penalties, including foreclosure, when they can’t make enough money to pay their bills.

They should not be penalized for something they have no control over, Fearn said.

“The hospitality sector, the nation’s second largest industry after health care, has been decimated as a result of the massive social and economic fallout from the COVID-19 virus,” the letter states. “Hotel owners across the country are being forced to furlough or lay off millions of hardworking Americans, many who are minorities who run our hotels and service our guests, which will lead to a significant increase in unemployment in our communities. We believe the CARES Act should specifically address this segment of the economy to avoid further economic disruption.

“As currently drafted, the CARES Act would not provide the authority to smoothly and quickly safeguard these jobs. Specifically, the CARES Act does not provide enough relief and has qualification criteria that no hotel owners can possibly meet. In conjunction with the NABHOOD, AAHOA and LHA we are putting forward the following recommendations to address the needs of hotel owners, who underpin the employment for millions of Americans.”

The hotel associations stated that $425 billion is far too little for non-airline and security businesses, especially since hotels are carrying $300 billion in debt. Forbearance and loan extensions along with loan and loan guarantees, including interest-free loans that could be forgiven in two years if all conditions are met.

“The hotel industry provides individuals with the opportunity to live the American Dream. Many hotel owners started their journey toward ownership working as housekeepers and front desk clerks,” the letter states. “The damaging impact of the COVID-19 virus on our industry risks the destruction of the American Dream. The potential loss of business due to bankruptcy or lender foreclosure will ruin the livelihoods of not just the hotel owners but the millions of Americans employed in the industry.”

He said when the 9/11 terrorist attacked kept Americans from traveling, both airlines and hotels suffered. But the federal government only came to the aid of the airlines.

“We have to make sure that doesn’t happen this time,” Fearn said.

In addition, he said employees need to be protected and assisted when they are unable to go to work and make money they need to cover their bills.

“This industry is so vital,” he said. “We employ so many people.”

Fearn, 54, has been in the hotel business since 1995. He has been involved in deals involving $1.5 billion and seen the industry damaged by 9/11 and other challenges. But this is different.

“I’ve seen a lot of things,” Fearn said. “I’ve never seen anything like this.”

(Click on the image below to read the letter to the Congressional Black Caucus and members of Congress.) 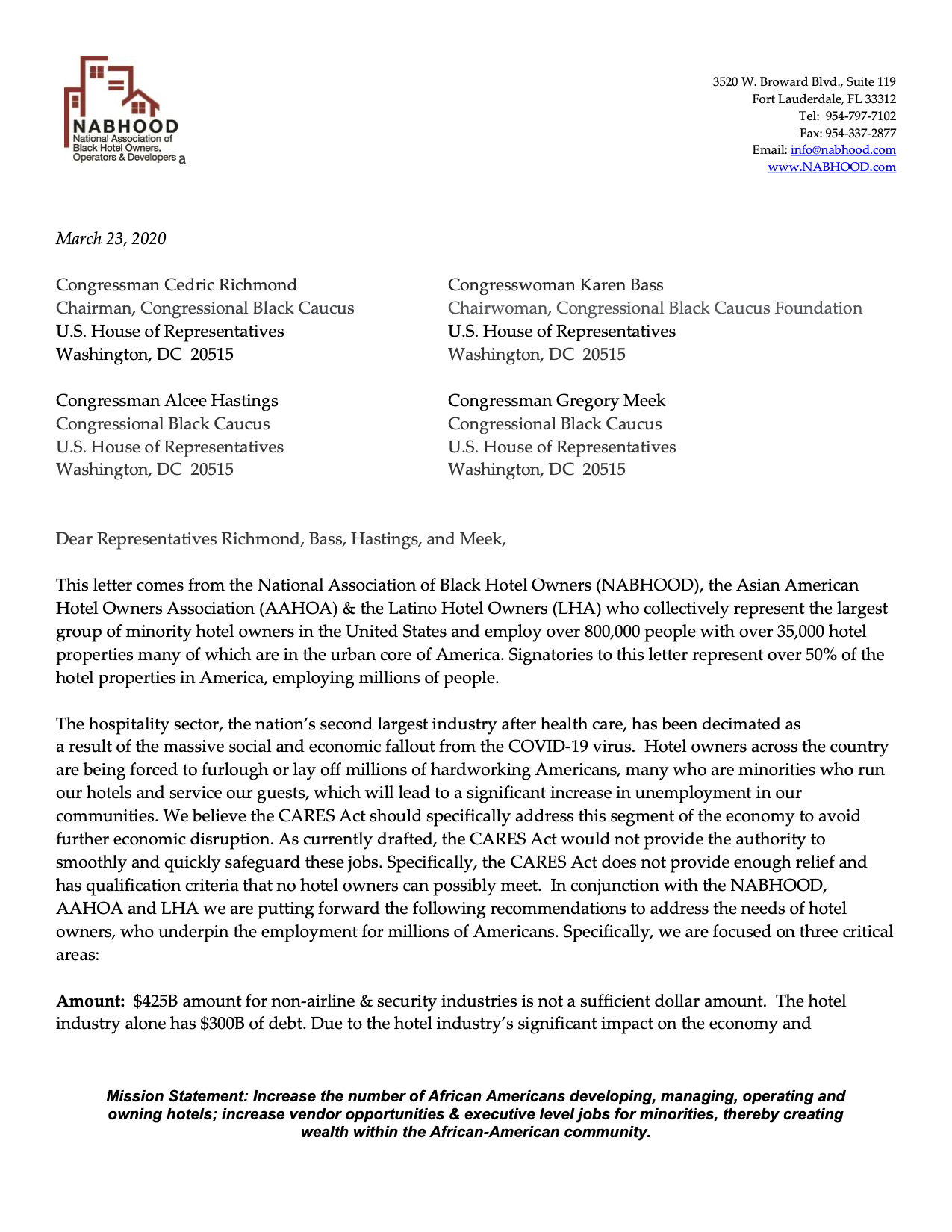 Want to get notified whenever we write about CONGRESSIONAL BLACK CAUCUS FOUNDATION ?

Sign-up Next time we write about CONGRESSIONAL BLACK CAUCUS FOUNDATION, we'll email you a link to the story. You may edit your settings or unsubscribe at any time.